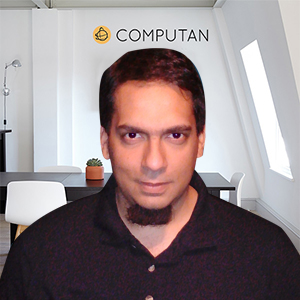 Bratislav Brankovic. Otherwise known to his Computan colleagues as BB.  2 initials… but 1 letter.  Brat is a HubSpot Project Manager at Computan.  He and his teammates do front-end HubSpot themes and templates for Elite, Diamond, and Platinum HubSpot Solution Partners.  In this installment of Behind the Coding, Brat explains the difference between animals and humans, his interest in marketing, and a guitarist he’d have for dinner who wouldn’t say or do anything.

Hi Brat! What are the last three things you Googled and why?

Hi Sajeel.  Let me check my browser history. Ok, the first thing I Googled was “Animals are beautiful people”

Hahaha! Why would you Google a phrase like that?!

It is not a phrase.  It is a documentary.

A documentary about what? Where did you see it?

I watched it at my colleague Alex Mitic’s house.  It is a documentary about animals.

What is the story of the documentary? How animals are better than people and we should treat them better?

They are similar but animals are better than humans. They have more feelings and are a lot more sensitive.

Ok! We will take your word for it.  What else have you been searching for BB?

Another hilarious search! Why would you be searching for that?

Well, it is simple.  At Computan we give gifts to colleagues and teammates on their birthdays.  One team member lives a few houses away from me (Alex Mitic), and his birthday is this weekend.  So I will get him a gift from the team.

What are you going to get him?

What else besides alcohol and animals have you been Googling?

There is a movie I want to watch called The Big Short.  I haven't seen it yet.  But have heard many good things.

It’s a true story too!

I didn’t know that.  Now I will definitely make time to watch it!

When was the last time you worked after hours to solve a complex problem?

Daily.  I work my shift as a PM.  I have a habit of spending time after hours improving myself and reading about different topics outside of PMing.

Why do you do that?

Because it’s important for the team and the business, I am a power user of Udemy!

What are the last few things you have learned about on Udemy?

I am trying to learn more about the commercial side of Computan and help with marketing and sales.  Also being part of the group trying to get us more active on social media platforms like LinkedIn.

Those are great contributions, BB! Who are 3 people you'd like to have dinner with at the same time and why?

That is an easy question.  Nikola Tesla, Thomas Edison, and Jimi Hendrix.

Interesting group.  Two of those people know each other; one doesn’t.  Why those three?

Because Tesla and I could team up and make fun of Edison!

Why would you guys make fun of Edison?

Edison really gets too much credit for things.  He was not a scientist or an engineer the way Tesla was.  He was a businessman.

Does that bother you?

No! It doesn’t bother me.  But history remembers him as a great scientist and engineer.  History should remember him as a businessman.  Tesla, on the other hand, has been an engineer for ages.

Why Hendrix though? What would Jimi Hendrix’s role be? To play guitar while you guys roast/tease Thomas Edison?

Hendrix? No. He is too respected by me.  He would sit there and eat whatever he feels like and do nothing.  Or do whatever he wants. I’d just want him there out of respect.

When was the last time you cried tears of laughter?

Probably on Saturday at a colleague’s birthday.  My stomach was hurting from laughing too much. It was a party until 4 AM.

No, I don’t….I was hurting for two days afterward.

What do you love about coding BB?

There is no limitation with coding.  In real life, we are limited by time and space.  We cannot be in two places at once, for example.  But in coding, we can do anything, and everything is possible.  The language I love the most is Python.

Why do you love Python?

Because, in my view, Python is the most robust language.  You can do whatever you want with just 3 lines of code.

Where were you when you first saw a laptop/desktop?

Why did they buy you a computer BB?

Simple.  Because I cried and cried and asked for a computer.  I use an emulator to play Nintendo (NES) and Sega Genesis games.  There’s a funny story about that.

What is the story?

I played games the whole night and wanted to get up but couldn’t move my legs because I enjoyed them so much.  Then I quit using the computer.

You quit using the computer?!

Yes.  I spent 2-3 years without a computer.  I read a lot of books. I started to play guitar and then did that for 13 years.  Now I like to make games.  I don’t have time for games.

What is something your teammates don't know about you?

They know quite a lot about me but they don't know that I am an electro-mechanical engineer and I am playing with high voltage currents, former actor, former guitarist, former baker (specialist for pizza :D ) former chef who cooks now only for family and friends, Egocentric who likes to win (they may suspect this but I am trying my best to hide it! I think that I won at that! :D )  I am not playing  for game I am playing to win!

Your teammates are from all over the world have you talked to them about how pizza tastes in different places?

A few have told me about pizza from Pakistan.  That looks highly spicy!

RIP PHP 7.4 – Time to Upgrade Your WordPress Sites to PHP 8