Twitter lies. There are definitely more than 140 characters allowed in the Twittersphere. Here are some of the many idiots and characters that you follow on Twitter.

People who Tweet about how important it is to be on Twitter and what a cool place it is. They usually write blog posts that start as 'an open letter to....' and are addressed to someone they've always wanted to confront offline, but haven't. Careful! The next person you cut off on the highway may be a social media expert who writes a blog post about you (which of course you'll never read). Try emailing a social media expert to retweet or post some content. They won't respond directly, but they'll Tweet a cryptic message despising your conduct/decorum. You'll be too busy to pay attention and unfortunately miss out on the 'Tweet Heard around the Home Office.'

People that love or despise a person so much (I can't tell) that they create a Twitter account on their behalf and regularly Tweet from it. Think about this for a second. The fake celebrity account creator feels that it's more enterprising and fun to Tweet what a celebrity should be doing (in their incredibly esteemed opinion)... instead of what they themselves are actually doing. Look, I love the parody accounts as much as the next person, but what went through the mind of the parody Twitter account holder when they registered on Twitter? 'No thanks, I won't register an account for myself. I'll just create this here fake Roger Federer account instead since fake Roger Federer is probably more interesting than real me.'

You know someone may have hit rock bottom if they trade tweeting on their parody celebrity account for tweeting as a fictional character. Why devote 15 hours a week to a fake James Earl Jones Twitter account when you can allot the same time to a fake @DarthVader one?

The idiots contributing to the web's endless clutter by automatically retweeting articles. Of course we love reading things shared by robots! Maybe that's why Will Smith only does alien movies. The only thing Robotweet does is fuel the ego of the aspiring social media expert. Who cares if those retweets are from ET or some other Robotweet setup by grandma? Minor details.

The motivational tweeter that regurgitates inspiring quotes. Please, Twitter Tony, stop feeding us all that motivation before we get indigestion. We don't need an all you can eat buffet's worth of pump-up Tweets.

The personal branding expert and best-selling author that still uses the default Twitter 'eggs' avatar as their profile picture. They were very happy when Free Willy (aka the Twitter Fail Whale) was liberated and discontinued.

Those 2 people you follow that are having a one-on-one conversation publicly over Twitter complete with hashtags. Does the entire Internet need to be involved in you scheduling a conference call? Dumb and Dumber also Tweet who they are having meetings with before the meeting starts and give a 'Great meeting!' Tweet once it finishes. All from the comfort of their 1984 sheepdog.

The people who hashtag 50 words in a row without spaces. It's obvious that these people need to #getreacquaintedwiththespacebar. Instead of posting a grade-school picture on Throwback Thursday these people should #gobacktogradeschool and #trytopasswithoutmommyshelp.

The person with 100,000 followers that also follows 100,001 people. You know this person signed up for every activity on the first day of school and didn't participate in anything afterwards.

The person that sends the not-so personal thank you message when you follow them, retweet their stuff or do anything to pacify their goal of becoming a social media expert/personal brand. You know they don't know anything about you or really care at all unless you promote their Tweets. Don't fret! If you include your favorite four-letter word in a direct message to them they'll write 'an open letter to the person who told me off on Twitter' blog post that should help you with your unintended personal branding.

You know who you can't follow on Twitter? Ordinary people. People that you actually know, have a vested interest in what they are doing on a minute-to-minute basis and don't mind listening to their soap box rants. They seem to be the only people out of orbit in the Twitterverse.

Maybe they are the 141st character.

The Characters In Black Friday Sales

The Characters In Your LinkedIn Network

The Characters In Your Email

Sajeel Qureshi is the VP of Operations at Computan, a digital marketing and software company. Computan serves as the digital department for numerous businesses throughout the globe ranging from start-ups to multinationals.

He has a degree in Business Administration from St. Bonaventure University and MBA from Eastern Illinois University. Sajeel plays tennis well enough to convince the untrained eye that he knows what he is doing and poor enough that the trained eye submits him to a drug test. 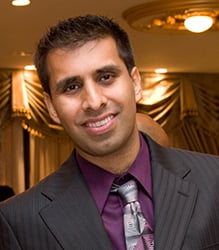 Osman Khalid is a front-end, WordPress, and UI expert on the Computan team. He knows the ins and outs of WordPress and ...
In News & Updates

Shaharyar is a HubSpot developer on Computan’s front-end development team. He’s a serious powerhouse when it comes to ...
In News & Updates

Farhan is a QC engineer on Computan’s HubSpot integrations team and front-end team.  He’s handled the ...