Why Developers Use Laravel to Build HubSpot Apps

There are custom HubSpot apps built with Laravel, MEAN StackStack, .Net SQL, and other languages. Laravel in PHP framework is a widely used language because it is open source and offers tons of functionality and features that work efficiently and securely across all platforms and not only HubSpot.

Why Use Laravel to Create HubSpot App?

Features such as Jobs and Queues work on Background in Laravel and do not affect the speed and optimization of the applications. This maintains the app's speed and keeps it optimized for better performance. On top of that, Laravel also uses the Hashed and Salted password mechanism to save the user password instead of saving it as plain text in the database. And, everything goes through an encryption mechanism for more security. You can choose which type of encryption you want, such as Bcrypt Hashing Algorithm for generating encrypted passwords. Laravel helps its users with prepared SQL statements that prevent SQL injection attacks from hackers. Not only SQL injection attacks, but Laravel also provides protection from CSRF (Cross-Site Request Forgery) attacks using CSRF tokens.

Looking at the security features, Laravel's popularity is inevitable. But, that's not all. You can manage big-data sets by automating the tasks, dispatch a job using a queue for faster processing, and it also offers a built-in command-line tool. You can also create business logic for marketing purposes in HubSpot.

If you love coding in simplicity, then Laravel is for you. Avoid messy and complex coding and accomplish the tasks with Laravel's easy and meaningful syntax. And, because of its simplicity, you code quickly in Laravel.

Laravel's built-in template engine – Blade is lightweight, offers stable structure, and helps create layouts using the concept of dynamic content seeding. Blade offers views in plain PHP code which is something missing from other PHP frameworks. Until the Blade views are modified by the user, they are cached. Blade's clear syntax and plain PHP are there due to template inheritance and sections that are part of Blade.

Laravel's built-in command-line tool – Artisan - This robust command-line tool helps the developers in task automation and database migration management. Developers can develop various features and functions within the application itself. They have the flexibility to use the pre-built Laravel commands or use their custom ones. They can create controller, mail, auth, migration, model among other functions through pre-built commands.

Laravel's integrated packages are pre-installed and in-built features that make things easy for the developers. The below examples

Laravel Debugbar – Add the developers' toolbar to the application development dashboard. It has a lot of options to display such as sessions, timeline, route, queries, mails, among others.

Eloquent – Sluggable – It is used to create easy slugs for your Eloquent models in Laravel. You can create a URL-friendly version of a string and Eloquent does it by converting the spaces into hyphens, accenting letters, and ampersands.

Laravel No Captcha – It implements the Google reCaptcha validation that protects the app from spamming. That is a security feature you can implement easily.

Laravel Migrations Generator – It is used to automatic migrations from your existing database. But, you got to submit your database in Laravel''s configurations. Migrate all the tables at once or you can migrate selected tables, both the options are available. Once it has migrated all the specified tables, then it will set up all foreign key constraints. So, make sure you've migrated all the tables you wanted and included that in a foreign key.

Laraval User Verification – This package handles user verifications, authentications, and validations. This is another security feature and by including that in the package, it saves time for the developers.

Spatie – The roles and permissions package 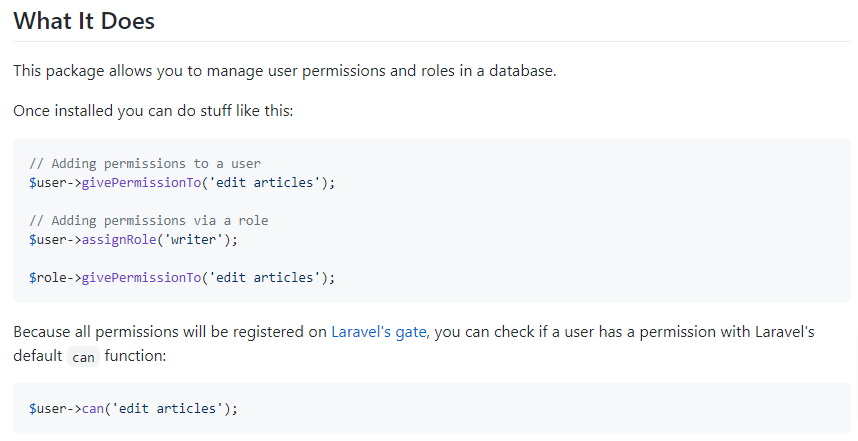 Laravel Backup – Automatically create a backup of your files within an application by simply running a command PHP artisan backup: run

This is just the tip of the iceberg because Laravel has packages for Search Engine Optimization and Marketing and eCommerce as well that are implemented by a simple command. This makes things a little easier and quicker for the developers. No wonder they are in love with Laravel HubSpot integration.

When we talk about WordPress' popularity, we know that the community of WordPress developers around the world is a big reason behind it. The same goes for Laravel; it's a huge community that is icing on the cake. You will never feel stranded with issues. The community and support will get you out of there, reducing the development time and cost.

At Computan, we use Laravel to build custom HubSpot apps for clients' integrations to offer solutions that were not possible through native integration or custom integration.

If you have an idea about a HubSpot app and want to bring it to life, find the right guys on the other side of the below banner.

How to Check WordPress Website for Malware And Secure it?